This page is outdated. Please check my website for more recent research.

Mobile ad hoc networks represent a new kind of distributed system with distinguishing characteristics that pose new challenges in the field of distributed garbage collection (DGC). In particular, DGC must deal with a highly partial disconnected network topology where remote references may be inaccessible for unpredicted amount of time. DGC mechanisms typically determine the reachability of the remote objects by means of communication between the nodes involved. However, in a mobile setting where disconnections are the rule rather the exception, the system cannot determine how long it should wait for a connection to be restored. Knowing when the communication will be restored depends on how the application reacts to disconnections. Some applications may wait for the connection to be restored to resume its computation while some others may continue their computation with a substitute service instead. Sometimes the geographic location of the devices or identify information may also influence the behaviour of mobile applications. DGC thus depends not only on the object graph but also on the context in which the objects are themselves - i.e the semantics of the application and the role of the reference in the network, but also implicit context such as the location of devices.

Our position is that reclaiming remote objects can no longer be a low level concern tackled in a transparent way via a DGC mechanism. On the contrary, we admit that automatic transparent DGC is irreconcilable with the characteristics intrinsic to mobile networks. Our research proposes a novel treatment of the memory management called semi-automatic garbage collection based on the collaboration between the developer and collector which will be guided by the developer to determine the reachability of the remote objects.

Semi-automatic garbage collection is a hybrid approach which relies on an underlying local GC and proposes a non-transparent DGC. The approach can be seen as an extension to the indirect reference counting (Piquer,91) and network objects (Birrell et al.,93) since it also maintains the distributed inverse reference graph (IRG) where each remote object keeps a list of pointers to other devices which have references to it. The IRG is augmented with additional semantic information attached to the remote references to help the collector to determine the reachability of the remote objects they point to. This means the developer will be able to steer the gc proccess and accomodate the requirement of the applications by means of annotating the remote references. 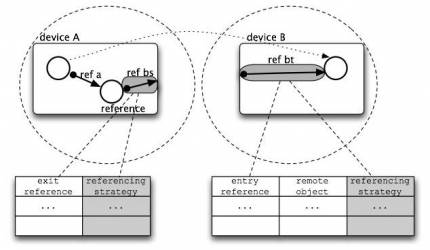 There are a number of open issues that are not properly tackled yet by our approach: