A characteristic function is a filter object that contains a “function” that determine whether or not a user is proximate. There are several predefined functions:

Other functions can be defined as combinations of existing functions by means or combinators: and, or, not.

Programmers can make customised characteristic functions. In order to aid the programmer in this tasks we have defined some auxiliary functions and constructors. In the code shown bellow we make a characteristic function that maps the domain of persons onto the set of people who are both female and friends in the proximity. The first step in the code is to create the female proximity. This is constructed by making a profile function. The first parameter is the flockr and the second is a lambda which expects a profile. This lambda must return a boolean value and indicates that the matched profile is in the proximity or not. In this case we check that the sex of the profile is female. The second function is a predefined one and only passes friends that are in the neighbourhood. The last step is to combine the two defined function's into one. As we only want to show those friends in the neighbourhood who are female we combine them by making use of a and operator.

An ad hoc RETE-network. Events are triggered by:

These events are received by the local flockr user object and propagated to all local proximities. Characteristic functions translate these events into addUser / removeUser events to be processed by flocks. To process these events, flocks register themselves on their dependent function. 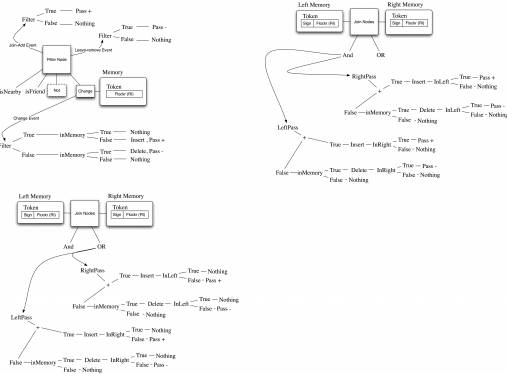 Alternative implementation of the RETE-network, maybe we can start from the oo matching that Tom implemented, so that Proximity functions are templates. For example:

Note of Tom: maybe too complex to use the templates, because we are not going to match on type tags or methods (only on state). We can simply compile proximities into boolean expressions of the form (ATTR OP VAL)